Like many of us, I'm on Facebook.  I try to stay away from the social games, since most of them are poorly veiled attempts to hook your brain on electronic crack until you're willing to pay for it (I'm looking at you, Farmville), and some of them are out-and-out information pirates.  But one that I succumbed to completely was Bejeweled Blitz, created by PopCap.  PopCap is truly the master of simple little games that will suck your life away, and I have had my brain claimed by Bejeweled variants from PopCap and other developers before.  In fact, I share this weakness with one of my online poker friends, Missy; I convinced her to sign up for Facebook by telling her about Bejeweled Blitz.  Full disclosure, she was thinking about it anyway, but I think hearing there was a cool new (to her) Bejeweled variant free on Facebook was the final straw. 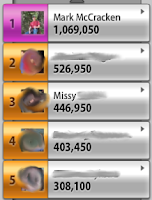 A quick note about how Bejeweled Blitz differs from normal Bejeweled: it's a 60-second game, so speed is of the essence; there is a personalized high-score board where all of your Bejeweled-playing Facebook friends automatically show up; and they reset the scores every week so that everyone is trying to beat each others' scores all the time.  Here are the top 5 from this weeks' high score board for my group of friends, which I am coincidentally dominating.

Missy and I are both very competitive, and we're used to facing off against each other at the poker table.  It wasn't long - like 3 games, maybe - before she had beaten my high score and I was grimly playing for all I was worth, trying to stay in the #1 spot.  Sixty seconds at a time, I watched hours disappear.  I think it was Missy who coined the phrase "stuck in a Bejeweled loop"; ironically, she was referring to her husband Todd when she first said it, but it easily applied to both of us as well.  Missy became my nemesis, my baby-with-one-eyebrow, my standard against whom my scores were judged.  We both waged psychological warfare, purposely getting semi-OK scores early in the week intending to re-up them when the other person beat the first round.  Sometimes others on my list would set higher scores, and I did my best to beat them, but failing to do so was never as infuriating as allowing Missy to win.

As we both practiced for literally hours per day, we got to be pretty good at it.  In the spirit of competition, Missy would occasionally accuse me of cheating when I set a particularly high score for a week.  In one conversation, she commented that Todd had semi-jokingly suggested that I had written a program to play Bejeweled for me.  I was flattered that he gave me so much credit - I thought that writing such a program would be so tough as to not be worth the effort.  But it got me thinking: could it be done?

Playing Bejeweled for hours a day, 60 seconds at a time, is a great way to waste your life.  But I found that my mind would wander while I played, letting me muse on the activities of the day and look at them from many different perspectives than I usually would.  When I started playing I was coping with a very unpleasant work situation that I hadn't decided how best to change.  As things came to a head about a year ago, I think my time playing Bejeweled after work was therapeutic and productive, letting me find creative ways to deal with some of the less technology-related problems (i.e. politics) that I would not have considered if my mind weren't idle anyway.

Fast forward 8 months or so, and I had no major problems to work out while I played Bejeweled.  My work-related stresses were greatly diminished, and I once more felt like I was contributing my best to a company that appreciated my strengths and gracefully accepted my weaknesses.  That left me with a problem-solving technique in search of a problem.  When Todd commented about writing a program to play Bejeweled automatically, I found my problem.

Stay tuned for Part 2: Defining the Game
Posted by Unknown at 7:40 AM