See Time For a Change for the first in this series, or check out the index to see all the posts dealing with Arch Linux. Today I will set up yaourt, which makes working with the Arch User Repository (AUR) much easier, and then use it to get NixNote installed.

Yaourt stands for "Yet AnOther User Repository Tool", which is a terrible name, but it is very effective at its job. It makes the AUR significantly easier to work with, by giving a pacman-like interface that does everything pacman does, but adds the AUR as a source. This makes installing packages from the AUR as simple as installing packages from the core repository... usually.

Having fought with and failed to get NixNote installed by hand, I turned in frustration to yaourt, and was pleasantly surprised at how easy it was to use. I still don't trust it entirely, because I can't find much in the way of documentation about it, and there seems to be some contradictory information about whether it is safe to use it for non-AUR packages or not. But I suspect like any labor-saving tool, my comfort with it will come long before my understanding.

I installed yaourt in a very similar manner to my installation of libgcal and akonadi-googledata before. It relies on the package-query package in AUR, which therefore needs to be installed first. The following steps can also be found at yaourt's website:

Next is to install NixNote. In theory, all I should need to do is:

And in theory, there is no difference between theory and practice. But in practice, there is (Yogi, or Al, or Jan). And so it is in this case. After a bunch of package downloading, configuring, and compiling -- all done by yaourt -- I finally get this error:

Let's break this down, shall we?

The -fPIC flag to the linker is a new one to me. Here's a man page reference, taken from man ld:

This doesn't really clear it up much. Some more searching led me to some related content that implied that the "recompile with -fPIC" advice was actually suggesting that I recompile the math library libm, which is an integral part of the operating system (pun intended). This is probably not a great idea, so instead I'll try to disable the use of shared libraries and PIC (Position Independent Code). By the way, if you want more information about all these issues, read this and then explain it to me. ;-) Anyway, I want to adjust the build process of libpng12, which all starts with the same command:

Except this time, I'll answer "yes" when it comes to the libpng12 PKGBUILD question. Within this file, I see a section called "build" contains the line:

This is a very standard way to get a Linux source package ready for building and installation, and the best place to make my change. Specifically, I'll change it to:

This isn't a big surprise, since I did disable the building of the shared library libpng with that first additional flag. For some reason, it occurred to me to do a file search on my hard drive for libpng12, and lo and behold, there was a libpng12.so.0 sitting in the Dropbox application directory! Yoink...

Finally, I can enter my Evernote account details, synchronize my notes from their server, and I'm off to the races. It's kind of sad that I had to jump through so many hoops to get this installed when the right answer would be to update NixNote to use the latest (and fully supported) version of libpng. Maybe someday I'll look at how feasible doing that would be, but today I just want my software to work. 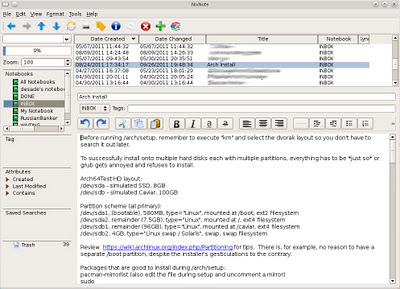