Last Saturday evening I headed out to Salt Lake City for my semi-annual ski trip.  This was going to be a pretty small group: just John, Phil, Rick (the owner of the house), and myself.  As it turned out, it was smaller than I expected.

As we taxied from the runway to the terminal at SLC, I turned on my phone and discovered two missed calls and a voicemail from Phil and John.  It seemed they had missed their flight, having gotten into a lively discussion about something or another, and not noticed that the gate had been changed on them.  Since that was the last flight from Detroit to Salt Lake, there was simply no way they would be coming in that night.  Rick wasn't due to arrive until the next day anyway.

I wandered over to the car rental counter, and asked for a 24-hour rental of the cheapest car they had.  Alamo gave me a fairly reasonable rate on a Chevy Malibu, and soon I was on my way to the house.  It was raining like crazy in the Salt Lake valley, which usually means snow up in the canyon.  I had heard forecasts of up to 12 inches of snow overnight, so I was excited for the next day of skiing, and sad for the other guys that they would miss out.

The house is in Sandy, which is a south-east suburb of Salt Lake, and in the foothills at the mouth of Little Cottonwood Canyon.  By the time I reached the house, the rain was mixed with snow.  I wearily unloaded my gear and climbed into bed, a long day complete.  The next morning, I found myself wishing I had thought to put the car in the garage. 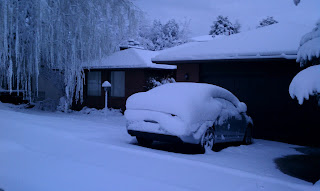 After cleaning off the car and getting ready for a banner day at Alta, I jumped on the internet to see just how much snow they had really gotten.  Sure enough, 12" overnight, and another 4-6" expected throughout the day.  The canyon was closed for avalanche prevention, due to open 8:30, but requiring chains, snow tires, or 4-wheel drive.  I have no idea if my Malibu had snow tires or not, but I was certain it didn't have chains or 4WD.  The Dept of Transportation website didn't list any such restriction, though, so I figured I'd see what the signs said.

I left about 30 minutes after the website reported the road open for business, giving traffic time to die down.  The house is about 3 miles from the mouth of Little Cottonwood Canyon, and then another 7-8 miles up the canyon to Alta.  As I exited the subdivision and turned onto the main road, I immediately entered stop-and-go traffic: all skiers, all headed into Little Cottonwood, all hoping to get fresh tracks at Alta.  And they were all driving 4-wheel-drive vehicles.

When Alta's busy, Solitude is a great alternative.  I headed over to Big Cottonwood Canyon and had no traffic issues at all.  I zipped up the first couple miles of the 11-mile canyon at speed, behind a pick-up truck that I figured was also headed to Solitude.  Suddenly, on an innocuous-looking straight section of road, he fish-tailed.  We both immediately slowed way down, and sure enough there was black ice under the snow.  The remaining 8 miles were a hair-raising experience, as I felt unsafe going any faster than 20 mph.  Other cars ahead were having trouble as well, and soon we were a line of ice-skaters inching forward up the steep switchbacks.  There is one double-hairpin turn in this canyon, and I sat on it for about 5-10 minutes waiting for a small SUV several cars up to repeatedly try and fail to move forward, only to eventually get himself rotated around downhill and head for home.  If I felt I could do that without going into the ditch (and, in this canyon, the ditch is sometimes 50 feet deep), I might have done the same.  Whenever I took my foot off the brake and prepared to accelerate from 0 mph, it was a fight to make the car go forward instead of whichever way was straight downhill.  Not a great feeling.

I did eventually make it to Solitude, however, and soon I was booted up and headed to the lift.  On my first ride, I got to chatting with the other single skier on the chair with me; we both preferred to ski with others, and decided to ski together for a bit.  It was clear from his favorite-run stories that he was a better skier than me, so I made him promise to ski off if I slowed him down - for his part, he assured me I wouldn't slow him down.  Polite white lie - I slowed him down.

We skied together all morning, enjoying the fresh snow and bemoaning all the closed areas.  Ski resorts in the Rockies are a delicate balance: too little snow and they aren't as much fun; too much snow and they have to close vast acreages of mountainside while they make sure it's safe from avalanches.  One of my favorite areas in Solitude is Honeycomb Canyon, a black-diamond and double-black-diamond area accessible via Summit chair and on the other side of the ridge that forms the main Solitude groom area.  This entire area was closed on Sunday for avalanche control.

I had a lot of trouble with my shaped all-mountain skis in the heavy powder, and was pretty jealous of Andy's tongue-depressor fat-boy skis.  He was able to get up on top of the snow and stay there, as if he was surfing on a wave.  Around lunch time, Andy said he had some things to take care of in the valley and headed out.  Before he did, however, we exchanged phone numbers and determined to meet up for more skiing the next day.  I was sure Rick, Phil, and John would like him, and more is always more fun than fewer skiers.

Here's a video with a few clips from Sunday.  Unfortunately I spent a long time finding just the right soundtrack for it (Arrested for Driving While Blind, by ZZ Top), only to have stupid YouTube mute it for copyright reasons.  So at the last minute, I swapped the track out with one of their "approved" tracks.  For the record, they all suck just as bad as the one I chose.