See Time For a Change for the first in this series, or view the index to see all entries dealing with Arch Linux. In this post, I will detail the steps I took to get Arch installed on my virtual system.

The "Live" Environment
When you first boot off of the Arch Live CD ISO, you get dropped into a command prompt, as root, with a little message on the screen that reads:

To begin installation, run /arch/setup
You can find documentation at /usr/share/aif/docs/official_installation_guide_en

i18n: Use the 'km' utility to change your keyboard layout and console font.

If you encounter issues and want to report them or seek help, run /arch/report-issues

If you are looking to install Arch on something more exotic, such as your kerosene-powered cheese grater, please consult http://wiki.archlinux.org.


Thankfully, I don't have a kerosene-powered cheese grater. Recall that I have switched myself over to a Dvorak keyboard layout, and I have replaced my old QWERTY-labeled keyboard with an awesome blank-keyed Das Keyboard. So of course the first thing I did was to run km and select a Dvorak layout. Ah, much better.

Steps 1-3
Then I ran /arch/setup, and was greeted with this screen (click for a full-size view): 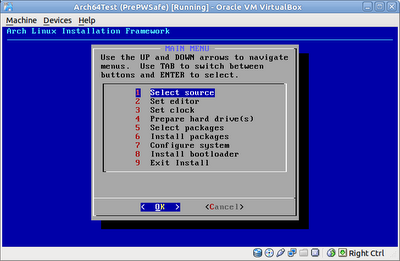 One might be tempted to jump around, but the installer won't allow that; so I started with the first step. The "select source" task gave me some cryptic warnings about making sure to use the right repositories, lest I hasten The Singularity. Not knowing what was the right or wrong choice, I just chose what was pre-selected by default. We haven't been enslaved by our computers yet, so I guess it wasn't a terrible choice. Back I came to the main menu, with "2 Set editor" helpfully pre-highlighted for me. Choosing this gave me a choice of "vi" or "nano". I'm a vi man, so that one was easy.

The next one was "set clock". I ended up having to run this installer several times for reasons unrelated to the clock, and eventually I came to the conclusion that getting too wrapped up in setting the clock from here, at least in a VirtualBox Guest, was a sucker's game. So, in my ideal install, I skipped this step.

Step 4
"4 Prepare hard drive(s)" may not look ominous to the uninitiated, but I knew from years of experience that this is where the partitioning would happen, and stuff would get tougher. As I explained last time, I have two storage devices in my main desktop computer: a 100GB SSD for fast booting and operating system use, and a 2TB hard drive for main storage. I don't want to devote a multi-gig chunk of my precious SSD to testing an Arch installation, and performance isn't the point of this test. The point is to have two hard drives, one large, one small, and to make sure I know where I want what, and that all my partitions and whatnot work out right. So both of my "drives" are actually contained in files on the 2TB drive. I proceeded with some trepidation to the Prepare Hard Drive sub-menu: 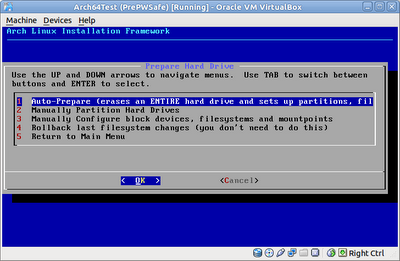 I put Arch on the laptop for a couple of days for fun a few weeks ago, and when I selected the first entry: "Auto-Prepare", everything worked out great. But that choice isn't appropriate for a multi-drive setup like my test machine. So that means I have to manually partition and configure the filesystems and mountpoints. This is never fun.

My simulated 8GB SSD mapped to /dev/sda, and my simulated 100GB hard drive mapped to /dev/sdb under the Arch system. By looking at the layout chosen by the auto-prepare option on a single hard drive installation, I determined that Arch likes to have a separate /boot partition. So I created the following partitions and mapped them to various filesystems and mountpoints:

Bear in mind that the choices above were finally determined to be the right ones after many annoying attempts. After each, the Arch Installer would format my hard drives, create the filesystems, and set up the mountpoints. I usually didn't know something had gone wrong for about an hour.

Step 5-6
Next are a couple of simple steps. Selecting the packages was easy, since I had no idea what most of them were, and I knew I could install them later if I realized I needed them. However, a couple of extra non-default packages turned out to be a good idea:

Step 6 - Install Packages is the easiest of all. It tells you to be patient, you hit Enter, and you watch it install stuff without having to do anything yourself.

Step 7
In the next step, I needed to create the initial system configuration files. Much of this can be skipped, but it's a good idea to cruise through each file and see if anything jumps out needing changing.

Arch has a simple System V-style configuration model, where most of the main configuration options are stored in the /etc/rc.conf file. I made a few changes:

There are several other configuration files that are available for adjustment at this stage, but rc.conf is the main one of importance. I added "arch64test" to the /etc/hosts file so it would match the rc.conf, and I also set a root password in this step, so I don't forget to do it later.

Step 8
Installing the bootloader (GRUB) is an infuriating step. The installer fails cryptically if it doesn't like something about the partitions chosen way back in Step 4, and your only choice is to effectively start over. Also, the Arch Installer makes a big deal about forcing you to look at the /etc/grub.conf, even though the contents never need changing. The first time I landed here I felt this sense of responsibility, like I had to verify every line in the file for correctness - tough when I didn't even understand every line! After going through this step five or six times, I became pretty comfortable with just instantly exiting out of the file when it popped up on the screen.

Success!
Eventually everything went well, and I kept my fingers crossed during the GRUB installation, and the installer exited successfully. That let me remove the install CD and reboot into my brand new Arch installation, which looks like this: 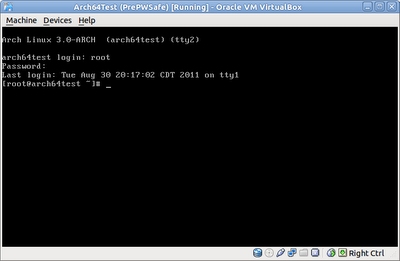 Now what? It's not exactly the multimedia experience we have all come to expect from our PCs these days. That's the thing about Arch, though: it is exactly what you make it. It doesn't try to guess what you want your desktop to look like - it gives you the power and the responsibility to do it yourself.

Next: X Windows and KDE
Or check out the Index