See Time For a Change for the first in this series, or view the index to see all the posts dealing with Arch Linux.

VirtualBox is well-documented on its website and on Wikipedia, and I see no reason to rehash that information. However, I want to discuss how I use it when testing a new desktop installation like Arch. It really works perfectly for my needs and I hope that now that Oracle owns it they won't screw it up like everything else they've touched (I'm looking at you, Java). Other similar products exist, including VMWare, KVM, and xen. After reading about them and trying them, I found VirtualBox the most intuitive, so that's what I use.

It begins with deciding what hardware the virtual machine will have. I like to approximate my real desktop machine as much as possible, so that I can encounter as many problems as I can before I wipe my hard drive. My desktop machine has a 4-core i7 processor, 6GB of memory, a 100GB SSD for operating system and fast-access files, and a 2TB hard-drive for main storage. The graphics card is nothing notable, since I don't really use this machine much for gaming, but for completeness it's an nVidia, and I am running the proprietary drivers for it. I'm running 64-bit Linux, as any reasonable person would with 6GB of memory. And I have a little stone skull sitting on the keyboard.

Obviously, since the virtual machine (known as a "guest") is running within my main machine (known as the "host"), it has to be smaller in every way, but it should have a similar footprint. So the guest is a dual-core processor, running in 64-bit mode, with 2GB of memory, an 8GB hard drive that I treat like the SSD, and a 100GB hard drive that I treat like the main storage drive. VirtualBox also gives me as many CD/DVD drives as I want, and I have one in there. Sound, network, graphics are all stock, supported by VirtualBox. Except for nVidia-specific driver issues, I have all the hardware likely to give me trouble in a real installation. Sadly, no skull on that keyboard. Now I need some software.

Next I download the Arch installation media, also known as the ISO. If you aren't familiar with an ISO, it is basically a CD in a file. I can burn it straight onto a disc or USB memory stick and have exactly what I would get if I ordered the hard media. But since I'm using VirtualBox, I can also mount it directly, without having to put it on anything physical. All I have to do is select the ISO file for insertion into the virtual CD/DVD drive, and to the guest machine it looks like a new disc was just loaded into the tray. By adjusting the boot order in the VirtualBox management application, I can have my guest machine - which I very creatively called "Arch64Test" - boot straight from that ISO file as if it were physical media. That starts the Arch Live environment, from which I can install onto the hard drive. When I'm done with the ISO, I click a little icon in the status bar of the guest's window, and select "Eject Disc". Simple! 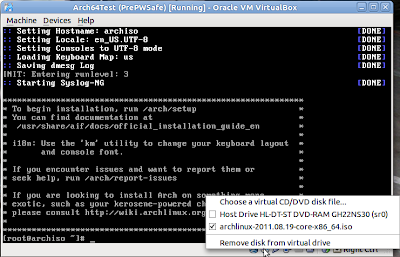 That's about it for the VirtualBox details, but there is one other feature that is really key for this type of activity: snapshots. I can take a snapshot of a guest machine any time I want (as long as it isn't running), and VirtualBox gives me a checkpoint. I can have as many of these checkpoints as I want, and they end up like a set of stills depicting the guest machine at various stages of its life. If at any time I want to roll back to a particular snapshot, I can do so from within the management application. I can't do this lightly, though, because rolling back to a previous snapshot throws away all changes to the machine since that snapshot. But if I'm having trouble getting something installed correctly, being able to roll back to just before I started screwing up the machine is really important.

Next: The Arch Installer
Or check out the Index