See Time For a Change for the first in this series, or view the index to see all the posts dealing with Arch Linux. After my fairly unchallenging triumph over ThinkOrSwim installation, I decided to ratchet things up in difficulty. I failed at that. 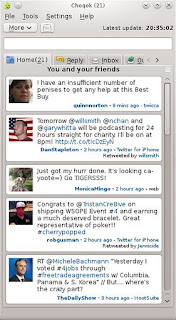 I found Choqok to replace Gwibber for following Twitter. I didn't much like Gwibber at first, but I got used to it eventually. One thing I liked about it was that I could watch facebook and Twitter in the same client. Choqok only supports Twitter out of the box, which is kind of a bummer.

On first launch, Choqok complained that it had no Twitter account to listen to, and gave me a chance to authenticate with Twitter. After doing that, everything worked fine, showing the window we see here.

Hex Editor
Wait, that was too easy. Let's do another one. On Gnome-based Ubuntu, I use Bless as a hex editor. I could install that on KDE, but typing "hex" into the KDE Launcher search bar brings up something called Okteta. Running it, it turns out to be a very capable hex editor.

OK, that's about as easy as it gets. I was going to go for three, but ran into major problems getting Moneydance installed. So I'll leave that for next time.

Three down, seven to go!


Next: Moneydance
Or check out the Index
Posted by Unknown at 10:38 PM